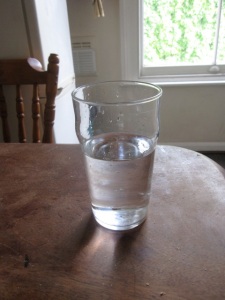 First up in the lemonade trials: Mrs Beeton.

Reading through these recently posted lemonade recipes I didn’t immediately discern that good old Mrs Beeton (dead at 28, having apparently lived part of her childhood actually “in the grandstand of Epsom racecourse”, which may have had something to do with it) makes the same rookie lemonade faux pas of attempting to sweeten it with nothing more than granulated sugar stirred into cold water.

Please. Do not, as they say, try that at home. Why not? Sugar doesn’t really dissolve in cold water. It just floats down to the bottom. You’d have to patiently stir for like 20 minutes to even get part of it dissolved, which may be very well if you have hours to while away inside the grandstand of Epsom racecourse, but that’s not fast enough for the likes of you. Is it?

So what follows is her recipe, but with simple syrup in place of her plain sugar. For those of you who have just done a little inward suck of breath – “I have to make syrup? Without the assistance of an Adams syrup gauge??” – and justifiably wary of technical instruction containing any form of the word “simple” (“simply reformat the disk as FAT-32”) – it really is no big deal, and takes all of four minutes to accomplish. Here is your recipe for simple syrup:

– Equal parts sugar and water in a saucepan
– Heat until clear 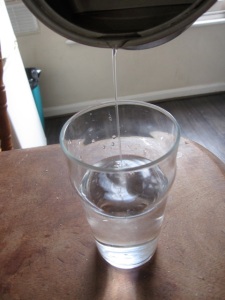 There you go. For one glass of lemonade you really don’t need much sugar – maybe an ounce or two? Wing it. Put some in the bottom of a glass, note how far up the side it comes, put in saucepan, then put an equal amount of water. You really can’t mess it up unless you leave in on the hob for half an hour, in which case you’ll have some nice caramel candy. Yum!

So – rather than “sweeten to taste” with sugar, I used simple syrup.

Of course, I was supposed to squeeze the lemon juice into the water first. I got so excited about my goddamn syrup that I just barged over that part. So I couldn’t really do it “to taste” – what would I be judging, the relative sweetness of sugar water? So I stopped pouring, and squeezed in the lemon juice – through a strainer, yes, Mrs Beeton! We wouldn’t want our lemon particles to get too unruly!

I found the lemon juice “floated” in the water, which I thought was strange.

Surely lemon particles are heavier than water? Apparently not. See how they’re suspended near the top? It’s possible that the simple syrup had sunk to the bottom and was pushing up against the lemon juice. I don’t know. Somebody clever could probably tell you.

And then came the moment of truth.

Mrs Beeton asks you to put in a quarter teaspoon of bicarbonate of soda (baking soda), in order to “effervesce” it. After it’s gone in, it looks like this:

Euugh. I drank it. She says to drink it immediately, “while it’s effervescing”. But you know what? It wasn’t bad! Kind of like a Berocca.