To make a Curry the Indian Way

Despite the fact that I really like Indian food, I don’t think I’ve made any Indian recipes for the blog yet, so typically I’ve now done two. The first is chicken curry, Britain’s Most Popular Dinner (according to every arm of the food industry with a finger in the pie of Indian food retail. Wait, hang on…).

I’m not going to go into how curry is not actually a dish and trade routes between England and India are hundreds of years old, because other people have done that already and better. (I found a fantastic concise history of all this on an old website, but then my virus software went berzerk, so you’ll have to make do with Wikipedia.)

Hannah Glasse was one of the first famous English women of domestic writing, pre-dating Eliza Acton by almost a  century (this is a cracking article about her).

END_OF_DOCUMENT_TOKEN_TO_BE_REPLACED

Comments Off on To make a Curry the Indian Way

Posted in 1740s, Hannah Glasse, The Art of Cookery Made Plain and Easy

This is from the I’M IN THE MOOD FOR cookbook published in 1982 by Wear-ever Aluminum. Whilst it concludes in all cases that you are in the mood for food, it does helpfully divide  the recipes into occasions such as Rainy Afternoons (Cheese Popcorn), The Pleasure of Your Own Company (Lemon Soup), and Romantic Notions (Stir-fried Cucumbers). I’ve chosen a recipe from the Winding Down section, which seems to link relaxation with violently attacking some meat.

END_OF_DOCUMENT_TOKEN_TO_BE_REPLACED

Yeah, so basically if it has soy sauce and is fried I want to eat it. Plus meat. This is another from Practical Shoyu Cooking.

END_OF_DOCUMENT_TOKEN_TO_BE_REPLACED

Comments Off on Shoyu Fried Chicken

I used to hate soy sauce. I don’t know how that happened because nowadays pretty much every meal is an excuse to consume the stuff. This book seems written for me – Practical SHOYU COOKING (Japan Publications, 1969) and indeed it is full of things I want to cook. I started with something very basic today, but hope to progress onto the more complex recipes, for instance there’s a load of omelette type recipes that are calling my name. But today, I needed soup. There’s not a lot goes into this dish, and convincing myself that it was what I needed as my first meal of the day was hard – I was certain I needed more substance, having forgotten to eat for about 5 hours upon waking (I was immersed in a general ‘life laundry’ type activity, where I created a huge pile of belongings all earmarked for the charity shop. Got a bit carried away).

END_OF_DOCUMENT_TOKEN_TO_BE_REPLACED

I inherited Elizabeth David’s A Book of Mediterranean Food from my great-aunt along with several others, including Florence Greenberg’s Jewish Cookery Book and the second volume of Julia Child (from which I have never cooked anything, although my eyes have glazed over trying to read the whole nine page recipe for Progres cake, which Ann Seranne manages to capture in half a page of much larger text. I imagine if I ever want to cook something complicated, it‘ll be invaluable.).

Mediterranean Food  was Elizabeth David’s first book published in 1950, though I have the 1955 edition, which has jaunty, (now  faded) cover art and illustrations by John Minton. David’s influence on Jane Grigson is clear: recipes are interspersed with anecdotes and quotations, assume a moderate level of competency in the kitchen and variations are offered.

Recipe
Slice 2lb of onion and put them in a deep casserole with a half-tumbler of olive oil, a little salt and a pinch of cayenne pepper.

On top of the onions place a cleaned chicken seasoned with salt and pepper. Cover the casserole and cook very gently in the oven for about an hour and a half. The onions must not brown , but melt gradually almost to a puree, as in Passaladina. Add a little more oil during cooking if necessary.

When the chicken is tender carve it into pieces and serve on a dish with the onions all round, garnished with a few stoned black olives and squares of bread, fried in oil.

If the chicken is of the elderly, boiling variety, it can be cut into joints before cooking, so that it will not take so long to cook, although whenever possible I think that chickens should always be cooked whole to preserve the flavour and juices and carved into joints for serving.

Results
I was so very excited about this and… it didn’t work.

When I took the dish out of the oven, I had pale chicken with damp skin in a green sea of onion slices, olive oil and chicken juice.

In order to turn this into something edible, I put the cooked onions (not the liquid) in a frying pan with a pinch of  fresh rosemary and cooked them until they browned slightly, then I stirred in  half a dessertspoon of flour and added some of the water in which I had boiled the potatoes for mash and  half of the olive oil and meat juice mixture from the baking dish as well as a little shake of Worcestershire sauce and left it to reduce by about a third. The chicken had been keeping hot in the oven and I now gave it a blast under a hot grill to crisp up the skin.

Voila! Meat and two veg – with some very photogenic gravy: 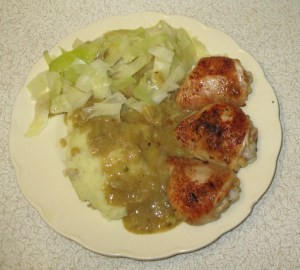 There are adjustments that could be made so that this dish works –  the chicken could be browned very briefly before being placed in the oven and the whole dish cooked for much longer. Alternatively the whole dish could be cooked very gently on the hob. Many using a metal dish rather than an enamel one would help the onion cook. I’m not sure when or even if, I will ever try these however, I’m feeling a little jaded.

This is the first in a series of 4 –  February is Pie Month! I am going to cook a pie a week and have invited friends over each week to help me eat them. This week, a classic chicken and leek, called for some reason, leek and chicken. (From Reader’s Digest Cookery Year (1976), from the March chapter by Katie Stewart.)
END_OF_DOCUMENT_TOKEN_TO_BE_REPLACED

Why did I decide to make this? Pure nostalgia. As a wee thing, my mother would (sometimes) bread small pieces of chicken for our birthday party teas, a sortof non-toxic (and, of course, very tasty) chicken nugget, to the approbation of our school friends. I remember one of the remarking ‘I’ve asked my mum to do some chicken, like yours’. My sympathies now lie with the mother – the little darling in question was one of four siblings (or possibly five). I then went through all my cookbooks looking for a suitable recipe in an attempt to find a suitable recipe and decided that a pared-down* version of Chicken Maryland perfectly fitted the bill. (This recipe is from The Reader’s Digest Cookery Year – February by Katie Stewart.)